skip to main | skip to sidebar

Now It's Time to Play

All Bark, No Bite

The Cheshire Cat: Avatar of the Hyperreal

The Cat only grinned when it saw Alice. It looked good- natured, she thought: still it had VERY long claws and a great many teeth, so she felt that it ought to be treated with respect.

`Cheshire Puss,' she began, rather timidly, as she did not at all know whether it would like the name: however, it only grinned a little wider. `Come, it's pleased so far,' thought Alice, and she went on. `Would you tell me, please, which way I ought to go from here?'

`That depends a good deal on where you want to get to,' said the Cat.

`Then it doesn't matter which way you go,' said the Cat.

`--so long as I get SOMEWHERE,' Alice added as an explanation.

Alice felt that this could not be denied, so she tried another question. `What sort of people live about here?'

`But I don't want to go among mad people,' Alice remarked.

Alice didn't think that proved it at all; however, she went on `And how do you know that you're mad?'

`I suppose so,' said Alice.

`Well, then,' the Cat went on, `you see, a dog growls when it's angry, and wags its tail when it's pleased. Now I growl when I'm pleased, and wag my tail when I'm angry. Therefore I'm mad.'

`I call it purring, not growling,' said Alice.

`Call it what you like,' said the Cat. `Do you play croquet with the Queen to-day?'

`I should like it very much,' said Alice, `but I haven't been invited yet.'

`You'll see me there,' said the Cat, and vanished.

Alice was not much surprised at this, she was getting so used to queer things happening. While she was looking at the place where it had been, it suddenly appeared again.

`By-the-bye, what became of the baby?' said the Cat. `I'd nearly forgotten to ask.'

`It turned into a pig,' Alice quietly said, just as if it had come back in a natural way.

`I thought it would,' said the Cat, and vanished again.

Alice waited a little, half expecting to see it again, but it did not appear, and after a minute or two she walked on in the direction in which the March Hare was said to live. `I've seen hatters before,' she said to herself; `the March Hare will be much the most interesting, and perhaps as this is May it won't be raving mad--at least not so mad as it was in March.' As she said this, she looked up, and there was the Cat again, sitting on a branch of a tree.

`I said pig,' replied Alice; `and I wish you wouldn't keep appearing and vanishing so suddenly: you make one quite giddy.'

`All right,' said the Cat; and this time it vanished quite slowly, beginning with the end of the tail, and ending with the grin, which remained some time after the rest of it had gone.

`Well! I've often seen a cat without a grin,' thought Alice; `but a grin without a cat! It's the most curious thing I ever say in my life!'
Posted by K.H.O. Appreciator at 9:16 AM No comments:

New media has put celebrity within reach of just about every cat. All Hail the New Economy!
Posted by K.H.O. Appreciator at 3:22 PM No comments:

The World’s Most Finicky Cat 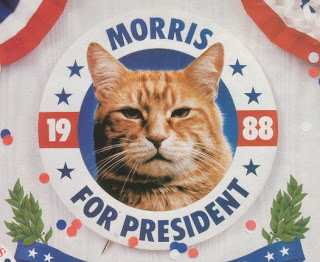 Today, Let Us Now Praise Famous Cats celebrates Morris the Cat, a celebrated brand advocate (or, perhaps, evangelist), author, and activist whose career started in 1968 when he was discovered in a Chicagoland animal shelter. In true Horatio Alger fashion, he leapt from life on the margins to a prominent commercial acting career, starring in numerous 9Lives Cat Food commercials over the ensuing decades. The 9Lives commercials proved to be the perfect forum for Morris to showcase his sardonic humor and they remain, to this day, classics of the genre. I have included a representative video sample for your viewing pleasure. 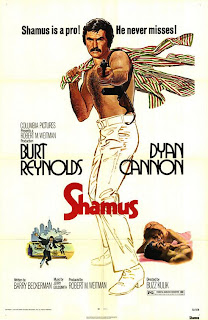 While the above is certainly what this famous cat is best remembered for, I would be remiss if I failed to mention some of his other work. One of my personal favorites has to be his supporting role in the 1973 Burt Reynolds vehicle, Shamus. While the film itself has never received more than lukewarm praise from critics, Morris’ contribution has gone down in history as one of the definitive moments in animal acting; introducing a gritty realism that had been lacking in the performances of previous cat (and dog) actors. Burt Reynolds as recently as 1993 has even listed the time spent on set with Morris as one of the defining experiences of his career. 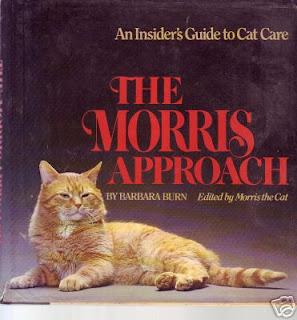 Perhaps the most overlooked aspect of Morris’ career has been his work as an author and activist forcefully calling upon humans to usher in a new era of more responsible and respectful cat ownership. The Morris Method (pictured to the left) was the first of three books authored by Morris advancing this cause.

In recent years, Morris has moved into direct action politics, launching his Million Cat Rescue struggle with the adoption of a cat from a Los Angeles area animal shelter. In 2007, he returned to the very Chicagoland shelter where he had spent his early years to launch the second leg of the campaign.

Thank you, Morris, for all that you have done and are continuing to do for your species and mine!
Posted by K.H.O. Appreciator at 1:29 PM 1 comment:

K.H.O. Appreciator
Minneapolis, MN, United States
Noted Blogsman, Devoted Father, and friend to the celebrity cat, the KHO Appreciator is a regular contributor to Stuffed Pheasant, the renowned taxidermy & Minnesota music blog, as well as the founding editor of the blogs Let Us Now Praise Famous Cats & Leadership!. He hopes that Let Us Now Praise Famous Cats will provide fair and balanced coverage of show business cats and counter the rabidly pro-dog views of blogs such as Professional Dog (http://professionaldog.blogspot.com). As the editor of Leadership!, he intends to provide in-depth coverage of the latest developments in the field of leadership.